China has some of the craziest traffic jams in the world. And this problem calls for some ingenious, out of the box solution. In a bid to achieve that. China has devised a brilliant solution and has shown the world that it is still possible to tackle traffic without reducing cars on the road.

Today China Xinhua News took the world by a storm by announcing that China’s concept of Transit Elevated Bus (TEB) has materialized and had its first successful road test. The bus was tested in Qinhuangdao City, and the test comprised of a brake and power consumption test.

The bus is powered by electricity and is about 72 feet long and 25 feet wide. This means that it can span and cross over multiple lanes of traffic. It is designed to carry as many as 1200 passengers at one time, but the future versions could carry even more! It is designed to hit max speeds of around 40 miles per hour which makes it a pretty speedy mode of public transportation.

While the concept is still not ready for daily usage, it is quite astonishing to see this concept actually turn into a reality. It has been such a hit that countries like Brazil, France, India and Indonesia have already started to reach out about potentially licensing their own versions of the TEB.

You can check out a few videos from the unveiling/testing ceremony here. Here is a video which will explain the general concept of this train and its functionality: 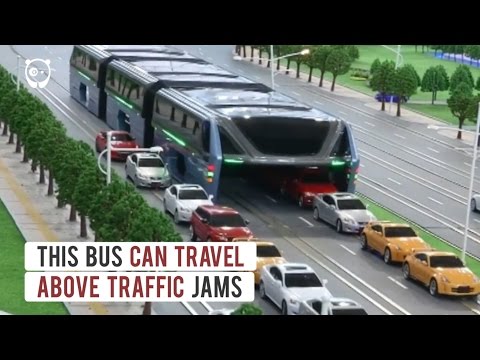 Do you like the concept or the elevated bus, or do you think it has too many technical flaws to be practical? Comment below!

First look at the iPhone 8